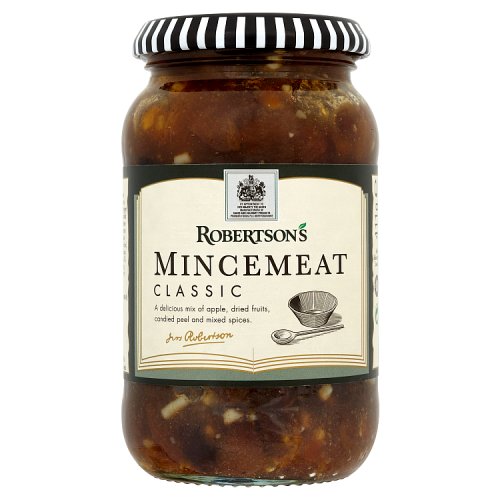 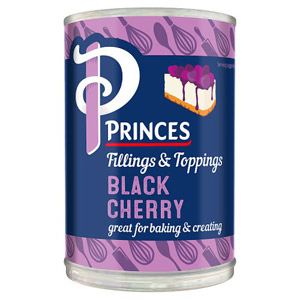 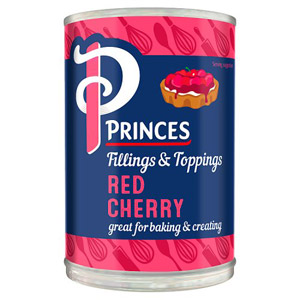 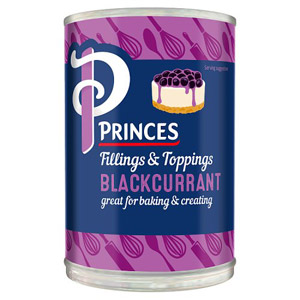 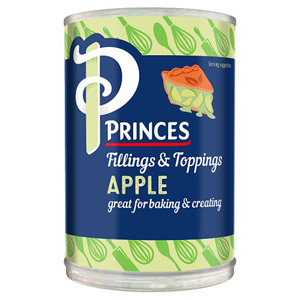 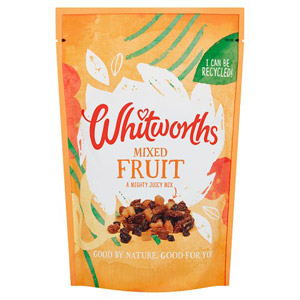 The product owes its name to the original mince meat recipe, where mixed fruit and spices were added to chopped meat. Despite retaining the label of mince meat, the modern version contains no meat, and is suitable for vegetarians.

Most popular with customers in France, Italy, United States of America (USA), Greece, Spain, Germany, Sweden, Austria and Denmark, but you can buy Robertsons Classic Mincemeat for delivery worldwide.

One of our Robertsons branded products.

I have always made my own candied peel and mincemeat. Like for so many other people Christmas is a very busy time. We had always used Robinsons Mincemeat as it's a trusted brand. This year we tried it again. It really hasn't changed, sadly such a lot of products have been spoilt over the years. It makes great pies, the filling stays moist when baked. The fruit, candied peel and spices are perfectly blended to give you that perfect flavour combination. I eat them all year round and from now I will make sure I have a stock in the food store.

What would Christmas be without mince pies? I usually make my own mincemeat but was unable to this year so was pleased to be able to order the old faithful Robertsons. I found it just as good as it used to be when I used it in the UK, but I think it was a little more 'runny' than I remember. I guess they have cut down on the fruit and added more liquid, but it's a good store cupboard stand by

Obviously, it isn't truly Christmas without mince pies and if you don't feel like making your own, you can't beat Robertsons Mincemeat. It has an excellent flavour and just the right amount of fruit. In the unlikely event that you don't eat it all at once, it keeps very well. A real taste of my childhood!

Have to make mince pies at Xmas but after making a cake from scratch, I usually run out f time so use this. It is a good quality but I do add things to make the taste deeper. I add some chopped apple, more holiday spices, a glut of brandy and a little dark brown sugar and the result is fantastic and much quicker than making from scratch if you do not have the time.

This is a truly delicious mincemeat mixture with the right balance of fruit, spiciness and sweetness to satisfy even the most critical palate. I have found that many commercial mincemeats, as well as some homemade recipes, are just too dry and heavy, but Robertson's seems to have got everything just right. One jar enabled me to make 30 small twobite size mince pies so probably about 1520 standard sized ones.I will most definitely buy this product again, and thank you Robertson's for reminding me what proper mince pies should taste like!

With Christmas being a busy time in the kitchen, this ready made mincemeat from Robertsons is ideal. It is very good quality with an excellent flavour without being over sweet. As well as using it for traditional mince pies, you can also be creative and make other Christmas treats including mincemeat puffs or rolls with puff pastry. A real essential in the run up to Christmas!

Robertsons Mincemeat is seriously lovely stuff! The French love the taste, and can't understand why their own shops stock nothing like it. And our British friends are constantly raiding our larder each Autumn as the mince pie making season approaches. So much so that we now order more jars than we need from British Corner Shop, just to satisfy them!

Robertsons mincemeat is superior and in my opinion is the best on the market. Over the years I have tried many brands but I always come back to this mincemeat.

As a child, my mum made many mince pies over the Christmas season and we had a long and happy tradition; when you took your first bite of your first mince pie each Christmas you got to make a wish.

All these years later I still make a wish on my first lovely mince pie. Christmas would not be the same without my Robertsons mince pies.

I love this product! As I live in France it is impossible to find mincemeat for making mince pies! I decided that last Christmas I would get some sent to France so I could show my friends what they are missing. The mince pies were such a success that I am now over run with orders to make more. Delighted to see that it is available here so I can continue with my baking!

I need this mince meat in my life so much! Here in France, you just cant buy it. It's been added to my recent order and I just cant wait to start making homemade mince pies to get that Christmas feeling going. It's easy to use and keeps in the fridge after opening if you don't use the whole jar in one go. Happy baking!

Now I can make some mince pies at Christmas and bring a bit of British festivity to our Italian celebrations. I was hoping to find a larger tub of mincemeat but these jars will be just fine and I have a generous weight limit for my order. Great site for all UK expats.

The best mince I've ever had!

There are not many choices available in Estonia except Marks and Spencer selection. Robertson's mincemeat however beats all of them.

When I opened the jar I felt this amazing smell.

The mince is sweet enough and has a good texture. Not too sticky to make pies.

This is possibly the most widely available mincemeat, and I believe one of the best in the market.

It can be used as mince pie filling on its own, but as I don't like my mince pies very sweet I usually mix one jar of mincemeat, with one grated apple, some raisins, and a little cognac.

Christmas without mince pies? No way! They are a tradition which I have passed on to my two daughters-in-law, one Italian and one American, and I just can't make them fast enough when the Christmas season comes around. Robertsons Mincemeat can't be beaten, not too sweet or too dry. I use it all year round, mixed with some stewed apple, to make large open mince tarts decorated with strips of pastry and they always go down a treat.

Christmas is all about tradition, and what would Christmas be without Robertson's mincemeat. The excellent quality of this product has stood the test of time. It has just the right balance of spice and suet teamed up with a wonderful mix of fruits. And who said it's only for the Christmas season.

I was making my own mincemeat at Christmas for years, seeing that they don't know what it is in Italy so you certainly can't buy it here. I thought that, being in a jar, it couldn't be sent from the UK, until I discovered the British Corner Shop. With their excellent method of packing your order there are no risks or breakages involved! I find this mincemeat the best quality for money, as it has a beautifully spiced flavour with just a hint of brandy. The dried fruit is plump and juice, the candied peel is perfectly proportioned as is the quantity of suet in the mix. One jar makes about 24 - 30 mince pies, depending on their size. That's a lot of Christmas cheer for such a small price!

Would you like to write a review for Robertsons Classic Mincemeat?