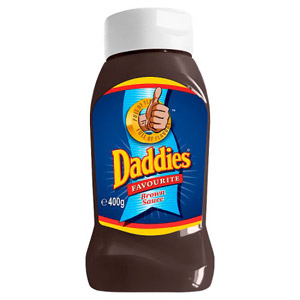 Creator of a delicicious Brown Sauces and Ketchups, Daddies has been used to spice up Brit's meals since 1904.

Now owned by Heinz, Daddies sauces can be used to transform your sandwich or as a secret ingredient to your shepherd's pie, chilli con carne and much more!

Daddies sauce has always been a firm chip shop favourite and has a rich history. Did you know during World War II, female factory workers sent sauce packages with notes of encouragement to soldiers on the front line.