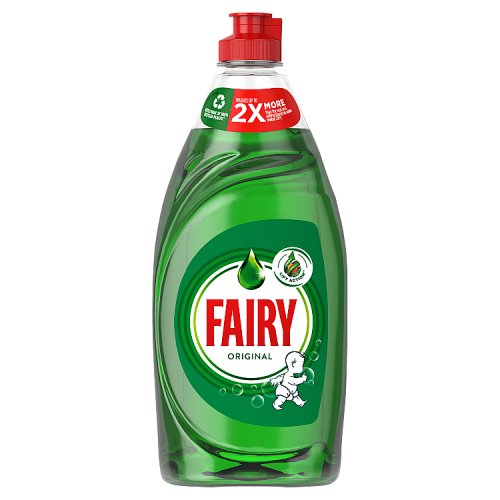 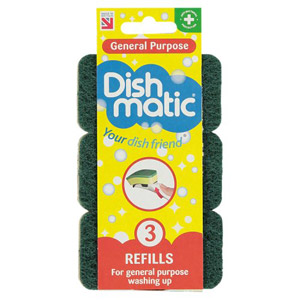 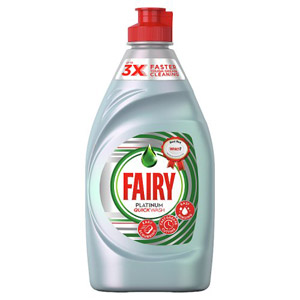 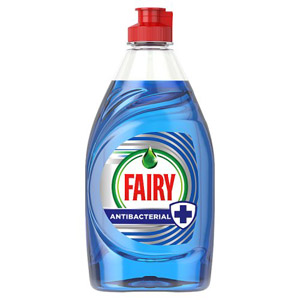 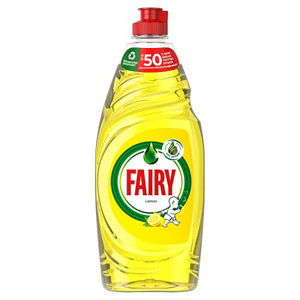 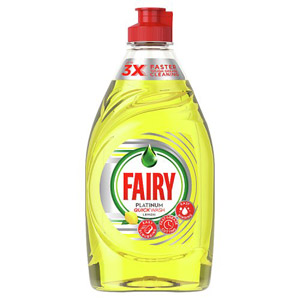 Tough on your dishes, soft on your hands, Fairy Original Washing Up Liquid is an old school favourite in the UK.

Initially appearing on British shelves in 1898 as a bar of soap, Fairy Liquid has stood the test of time and has become a legendary washing up liquid known for being the ultimate force against tough, stubborn marks on pots, pans and glasses.

Blue Peter craft enthusiasts will have to wait that extra bit longer for this large bottle of Fairy Liquid to be empty!

Most popular with customers in France, United States of America (USA), Italy, Canada, Korea Republic of, Japan, UK - England, Thailand and Switzerland, but you can buy Fairy Original Washing Up Liquid Large for delivery worldwide.

One of our Fairy branded products.

Fairy washing up liquid is a brilliant, high-quality product. One bottle lasts for ages because a little goes a long way in the bubble department, so you only need a couple of drops each time. It cleans dishes very well but it doesn't dry out hands. Fairy has a pleasant scent that isn't too strong unlike some of the brands on the market. It's worth paying a little more for this washing up liquid because it's better value for your money in the end.

I live in Italy so don't see fairy liquid here they sell cheap watery liquids so I bought it from British corner shop and it lasts so long and washes my dishes so much better than the other cheap ones so thanks if it wasn't for this company I wouldn't be able to use fairy liquid at all great quality lasts ages.

Fairy liquid is by far the best washing-up liquid on the market.

When I was living in France I could not find a washing-up liquid that was anywhere near as good as Fairy. Fairy not only smells good but it lasts for ages. The best thing about it is that it really does get rid of grease/oil from dirty pots and pans.

When I was first married we lived in Britain, we used Fairy dish washing liquid to do the washing up. Being newly married money was tight so I decided to go on an economy drive, when the bottle was finished I filled it up with a much cheaper bargain brand. My husband kept complaining that Fairy was not as good as it used to be, (he was not aware of what I had done) I thought he would get over it.

About a month later I got a coupon in the mail from the manufacturer saying that they were sorry I was disappointed with the product. My husband told me he had sent them a nasty letter and had torn a strip off them.

I felt terrible and so guilty that I put the exact amount of the coupon in the collection plate at Mass the following Sunday.

I bought Fairy after that and my husband was convinced we must have had some from a bad batch.

Fairy Original Washing Up Liquid is a good quality, and also not too hard on your hands.

It leaves the dishes shiny and clean, and a small amount will be enough. This large bottle should be your choice if you want to be economical as you don't have to buy more all the time.

Fairy make excellent products. Although you tend to pay a bit more for their products the reason for doing so is quite simple. QUALITY.

One bottle of Fairy Original Washing Up Liquid goes a very long way indeed especially when compared to other products that are supposed to do the same job.

Fairy beats all others and leaves your hands nice and soft.

Fairy is by far the best washing up liquid brand you can find, none of the brands I can find abroad quite match it. It is strong enough to clean dishes using only a few drops and it is not aggressive to your skin if you do not use gloves.

Would you like to write a review for Fairy Original Washing Up Liquid Large?