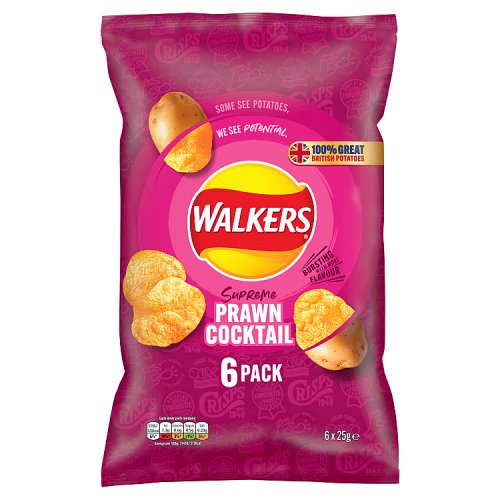 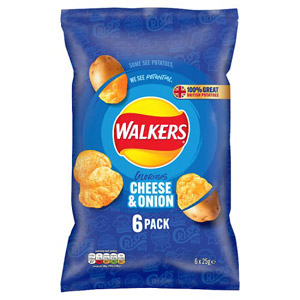 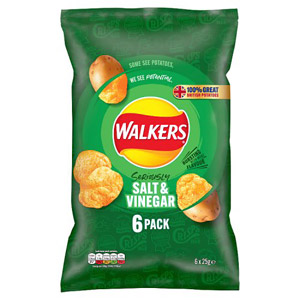 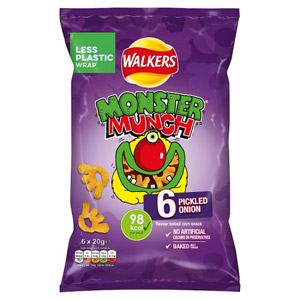 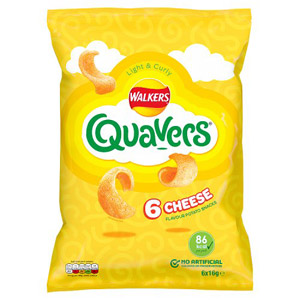 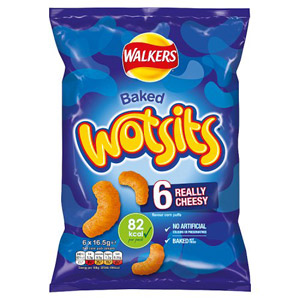 Everybody loves a pack of crisps and Walkers Prawn Cocktail are a great alternative to the more traditional flavours. This 6 pack will certainly satisfy your crisp cravings for a while.

They have a light and tangy flavour which always keeps you reaching for another bag.

Walkers Crisps are made from British potatoes, meaning you can enjoy a pack of Walkers Crisps safe in the knowledge that you are supporting local, home grown products.

Most popular with customers in United States of America (USA), France, Canada, Germany, Italy, Netherlands, Spain, Australia and Korea Republic of, but you can buy Walkers Prawn Cocktail Crisps 6 Pack for delivery worldwide.

These are quite unique. Not long ago I didn't even know what prawn cocktail was and even though I have never tried the real thing, the crisps were really good! They kind of remind of salt and vinegar chips, but more like vinegar only, plus a faint seafood smell the seafood smell/taste basically doesn't exist. These were tangy, crisp, not too thick and addicting! A perfect unique British thing.

Prawn Cocktail is one of my all-time favorite flavors when it comes to crisps. Here in the USA, I can't find this magnificent flavor anywhere, so I must add some Walkers Prawn Cocktail crisps to each order. The taste is very zesty and tangy and will be sure to give your tastebuds a real kick.

There's no point buying just one bag because you'll regret not having more once you get through all the packets! Definitely the best prawn cocktail crisps, my colleagues always think I'm weird for wanting them but then always want more when they're offered to try them.

Far and away, the best potato crisps you can buy. Sure, they're not fancy, they're not super crunchy like McCoys claims to be. But they're very satisfying and the flavour. Damn, they're just as good as I remember them. These will be in every order I place. They vanish in the few shops that sell them in the States so it's nice to know I can rely on British Corner Shop.

I remember liking these more when I was actually in England. Maybe because I hadn't had them yet at that point? To me they taste more like the ketchup crisps Canada is known for trust me, it's a thing. Not much flavor in my opinion. British cocktail sauce in general also tends to be more tomatoey vs. horseradishy-lemony that North Americans are more familiar with, so there's that too.

Delicious and satisfies the craving!

Great taste, this flavour can sometimes be too strong in other brands but Walker's have the balance just right! love the option to purchase a pack of six, stops me eating them all at once!

Walkers Prawn cocktail crisps were impossible to get in the USA until i found the British Corner Shop. I used to eat these a child back in the UK and always enjoyed the tangy flavor. Walkers crisps are always fresh and packed with flavor.

The flavor is very special and taste pretty good. There is no such things in Asia. Glad that we can buy this on britishcorner.

Tangy tangy tangy!! These bad boys taste amazing. Once again Walkers surpass my expectations! I always remembered them being very tangy and tasty as a child and I still get that flavour profile now. I had to fight my fiance off these so I could pig out on them, haha!

Hello, I am from Spain and I traveled to England eleven years ago. When I was in London I tried Walkers prawn cocktail and it was very impressive for me. I have never before tasted this flavor or similar because in Spain, it does not exist.I managed to make a hole in my suitcase to bring a couple of bags to my country to be tested by my family and they were also impressed.Very good.

Same great taste as I remembered. My absolute favorite in crisps EVER!

Walkers do make it hard to decide which flavour to choose as they are all so great! The prawn cocktail flavour is definitely one of my favourites, with the zingy prawn flavour that has a nice, ever so slightly vinegary tangy taste to it. Nice and crunchy, good quality crisps.

Walkers crisps are the best out there, and always provides tasty and flavourful coatings for their crisps. I have never seen prawn cocktail crisps anywhere apart from the UK so I was interested in trying them. The taste is not overpowering, the prawn flavour blends nicely with the cocktail sauce to make it an inimitable taste.

Prawn-cocktail crisps are just another one of those bizarre British flavours which you can only buy in the UK. Worcester sauce, Marmite, Salt & Vinegar, and Cheese and Onion are a few of the others which I miss away from home. Fortunately I have discovered BCS and my supply of my "fix" is assured.

This great value six pack is one that I do not buy so often purely because Walkers are so successful and great with what they have achieved with their other flavours that I feel buying these is simply not necessary. I would much rather spend my hard earned cash on other varieties that really get you wanting to eat them such as Salt and Vinegar or Cheese and Onion.

I really love these potato chips and as I can never find them in Greece, I was thrilled to find them here.

The sweet and sour taste is a bit unusual and I think it is one of those things you either love or hate. It has to be said though, that the flavour is cocktail sauce and they don't taste like prawns at all.

As each bag is very small, I really recommend the 6 pack, as it will last longer and it is more cost-effective.

I was apprehensive about trying "Prawn Cocktail" after having very bad experiences with other "seafood" flavored crisps in the past... boy was I wrong. There is almost no distinction of anything "prawny" about them - just a tangy, slightly vinegary, ketchup taste that makes them utterly addicting. So happy to find them at such a great price.

Why can you not get prawn cocktail flavoured crisps in france? I missed these for years before finding the British Corner Shop. They are the original prawn cocktail flavour with that tangy taste that anyone who knows them will recognise. They keep well past their sell by date but will eventually go a bit soggy.

Would you like to write a review for Walkers Prawn Cocktail Crisps 6 Pack?