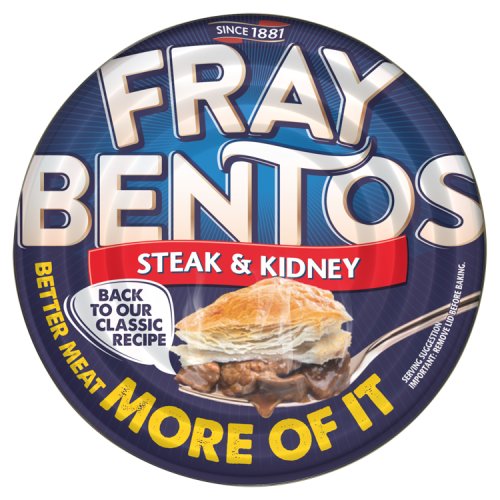 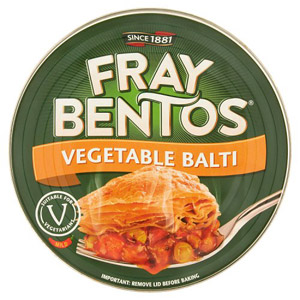 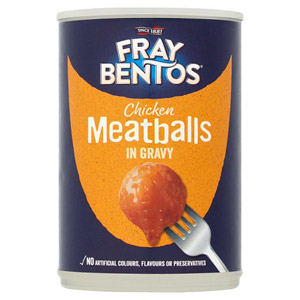 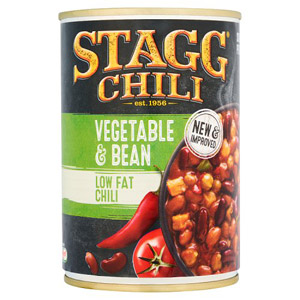 The most recognised of all tinned pies, the classic Fray Bentos Steak & Kidney Pie was originally launched in 1961. This great value option contains delicious pieces of steak and kidney, covered in tasty beef gravy and topped with puff pastry.

Fray Bentos Steak & Kidney Pies are perfect if you are shopping on a budget and also if you don’t have the time to make your own pies. They take about 30 minutes to cook and can easily feed four people.

Perfect for warming yourself up on those cold winter nights. It's also available for delivery to Australia.

One of our Fray Bentos branded products.

The old Fry Bentos pies. As said in previous reviews - they could have had more meat in them. Not too bothered about that, fortunately. The taste is still there and to save messing about when cooked, I slice the top open and put peas and carrots in. Works a treat. Still buy them. But why do Fray Bentos not look at reviews? Everyone says they are short of meat. Which they certainly are.

Where's the meat? The ingredients list water three times!!!, with other ingredients including beef 10 and pork kidney 8. I'd be surprised if it was actually that much. Oh, puff pastry = 27 NOT impressed!

Fray Bentos Steak and Kidney Pie is a good example of an English pie. The flaky crust is delicious especially if you let it crisp up and don't take it out of the oven too quickly. The filling is a little different from what I remember. There is more of the rich dark gloopy gravy and less big chunks of steak and pieces of kidney. The taste of the meat is still very good. This pie serves two people and I find mashed potatoes and carrots are both good accompaniments.

In fairness, a Pastry and Gravy pie. One is hard pressed to find the tiny bits of meat at the bottom I tasted a single 14 teaspoon piece of kidney in the whole tin. A disappointment, and I say this as someone who also appreciates a good pastry or gravy.

I bought 3 of these Steak and Kidney pies as I thought that Fray Bentos always had a good name for quality, the pastry turned out very well. However, the filling was a bit of a let down it was just a load of mashed up meat in a very heavy gravy we did not have single solid chunk of meat, I think that I will making my own in the future.

Fray Bentos Steak and Kidney Pie is a most successful example of a classic English dish. The crust is very crisp and flaky and the contents of the pie are delicious with an especially lovely gravy. We used to enjoy steak and kidney pie, on occasion, when I was growing up in Australia.This is a fond memory so I try to have one waiting for my sister when she comes to Norway to visit.

In France there is a woeful lack of pies in general, so the arrival of Fray Bentos Steak and Kidney Pies is a 'reason to be cheerful'.They are tasty and filling and easy to cook. I prefer their chicken pies but my husband loves these. Good staple English fare.

I will always keep some of these tins as an emergency meal in my cottage, nice to open one when you come in late and there is no fresh food in the fridge. The pastry crust is beautiful after 25 minutes in the oven, and the meat and gravy tastes just fine. But a tin is not enough for more than one hungry man, who still would want some potatos or mash to go with it. Some gherkins, beetroot or cranberry sauce will be nice too.

I have just placed my first order and ordered 57 items including 39 fray bentos pies and some bisto gravy and loads of heinz beans. I live in France and can not believe I stumbled upon this great site. Good old British food! Thanks so much for such a great choice of products

I bought these for my dad who is also an expat. He said the taste is as he remembers, and it was easy to heat up the pie in the oven. Personally he preferred the Steak and Ale, but would still recommend this one. The serving size is enough for 2 people, but I would recommend serving it with some extra like chips or a creamy mash

When I was a child, this was my absolute favourite. Over the years I have tried hard to make something which could even closely resemble or taste like this, but have always failed. Now however, the answer is easy. I simply order from this store and await the delights of opening my package. This time I ordered 6 just in case I feel like treating myself.

One of my favourites and it still tastes the same as it did 10 years ago! You don't realise what you like the best until you can't get it so to have this delivered to my door it Italy is great! I like all Fray Bentos pies but this is just the best!

I recently purchased Fray Bentos steak and kidney pie and I was delighted that it tasted just as I remembered and hoped it would. As a child growing up these pies were a family favourite. My father never knew that my mother was not responsible for this pie as she used to dispose of the tin very carefully, she justified this to us by explaining she had indeed baked the pie! If my dear mum could pass this lovely pie as her own so can you as it does taste genuinely home made. The pastry cooks as light as a cloud, lots of meat and gravy, a fast and enjoyable meal.

If you are a pie lover but are not so good in making fresh pies then this is your answer. Fray Bentos pies are quick and easy.

The results are always the same and the pasty just loves to rise nicely leaving you with a spectacular looking and tasting rich pie.

Not bad for a tinned, emergency meal but obviously it cannot be compared to 'fresh' pies, even shop bought. The meat and gravy isn't all that tasty but the puff pastry topping does puff up and brown quite nicely. Again, it's a good, last minute meal choice for two, with a lot of veg and a sprinkling of salt and pepper (especially on the meat filling).

This is just the classic that you can't do without.Open the tin, put it in the oven and half an hour later you have great tasting pie. Nice chunky bits in there covered in lots of sauce,very tasty.That was one of the nicest meals out here in Italy...You cant beat good old pie.

A great standby meal. Some reviewer say not enough for 2 we find it is enough when you also have a range of fresh veg to complete the meal.

I buy them for memories more than the actual taste. The taste isn't really all that, and the meat is sometimes a bit scruffy.

However; the flaky pastry is the best there is, and the first time you apply your knife and fork is something special. So as long as you don't expect a gastronomical revolution, these will do just fine.

Fray bentos pies are the best by far and make my mouth water just by looking at them! Steak and kidney go so well together and bring different textures to the pie. The gravy is rich and generous. Like another reviewer mentioned, it is even a bit small to share for 2 people, or you need to add extra gravy and a few vegetables on the side.

I still purchase these products, but I still need to know the secret of how to raise the pastry as it is shown on the adverts.

The biggest moan is, it is advertised enough for 4 people, it maybe that for a snacket. In my house we have one pie for one person, and we are not big meat eaters.

I watched Sean Bean saying how much he loved them on the Jonathan Ross show, and how he had them flown out in bulk to his film set in India.

I'm with you Sean! I'm going to order my own shipment of Fray Bentos now and remind myself how good they are.

This was a blast from the past as we now live in France and there is nothing like Frey Bentos Steak and Kidney Pie here. We thank BSC for making Fray Bentos available to us, and we shall be ordering it every time we place an order.

Suffice to say our first order was for one item, second order is six items and probably the next will be even more, thank you.

Would you like to write a review for Fray Bentos Steak & Kidney Pie?