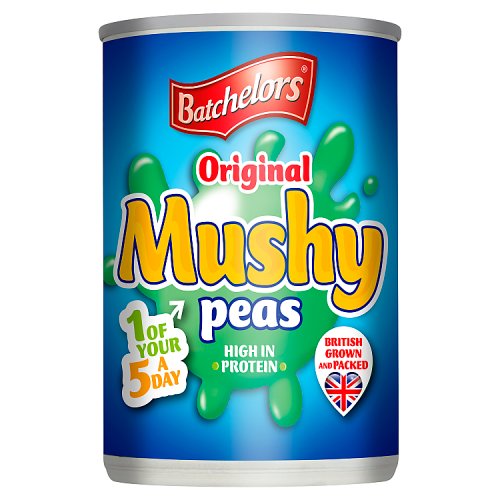 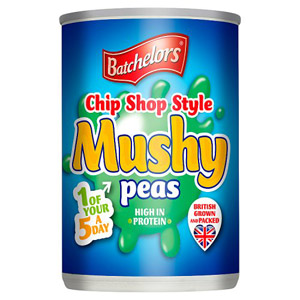 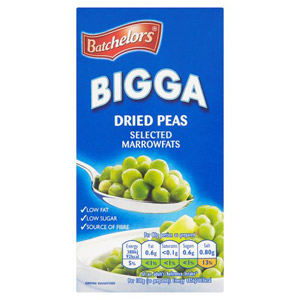 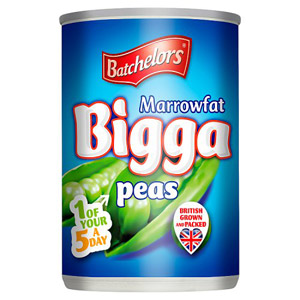 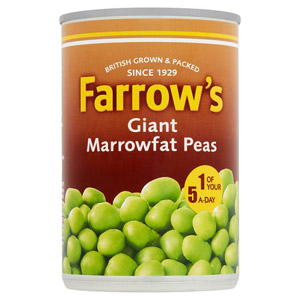 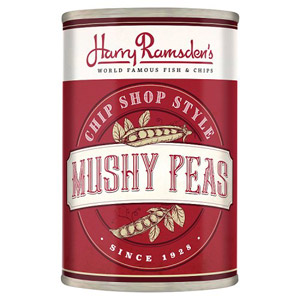 Batchelors Mushy Peas are the perfect addition to the traditional British fish and chips meal. They are really simple to prepare - just add to a saucepan or microwave to heat up.

Many mushy pea lovers find themselves incorporating them into all manner of meals, including roast dinners, alongside faggots or sausages.

Most popular with customers in France, United States of America (USA), Italy, Germany, Spain, Greece, Canada, Netherlands and Sweden, but you can buy Batchelors Mushy Peas for delivery worldwide.

One of our Batchelors branded products.

I would give these 10 stars if I could !! There is something about making yourself at home, a large portion of good old fish and chips with a very generous helping of mushy peas on the side. Sprinkled with salt and pepper, a splash of vinegar, OMG I am in heaven !!!

As a child mushy peas was a product that I detested with a passion, It's true that I had ever tasted them. I first tried them in a famous fish and chip restaurant Harry Ramsdens and was pleasantly surprised. I prefer them with a splash or two of malt vinegar, fish and chips are not the same without a portion of mushy peas.

Mushy peas have been one of my favorite side dishes ever since I was a little girl. It tastes delicious and goes very well with fish and chips, bangers, pies or sausage rolls. You really can't get a more perfect accompaniment to a meal. It is considered a delicacy in the United Kingdom. Being in the USA, mushy peas are difficult to find in stores. However, at least now I know where I can find this taste of heaven.

I love Fish n Chips and there is no better accompaniment to them than these. Batchelors have it just right, the consistency is perfect not too mushy and just enough of the sauce. I have tried making my own with dried peas, but with these, it's just not worth the effort. I have to admit to sometimes adding just a little mint sauce. I would highly recommend them for a nice fish supper.

I am a big fan of mushy peas. I live in France and these things don't exist over here, it's a shame because I think the French would like them. Thanks to British Corner Shop, I can now have this lovely British delicacy at home. In true Britsh style, I love to eat these with fish and chips. But I also love them with a nice homemade meat pie why not try a pie and peas dinner yourself too.

My husband and my daughter just love Batchelor's Mushy Peas. We have lived in the USA for 39 years and we buy them at our local store even though they are quite expensive. Now that I have found them on your website at a much lower price, I will be buying them in bulk to keep them going for a while.

Mushy peas just like I remember from living in England 30 years ago. I bought 10 cans and enjoy the flavor, texture and yes even the color. It is funny someone else's review said they were a bit mushy that's the way they are supposed to be they are mushy peas after all.

I can't abide the USA version of canned peas. But then I saw Mushy Peas on a video of iconic British foods, and I had to try them. They are amazing. A little mushy, but still with a bite to the peas and a fresh taste, not like canned at all. I put on creamy French style butter and a little salt and pepper, and I can eat the whole can. I have shared them with others, who were just as surprised at how good they are. I recommend these to anyone who doubts they can like canned peas.

Fish, chips and mushy peas! I have been missing the mushy peas with my fish and chips for over 10 years, but now I have discovered BCS I can have them whenever I want. For me, Batchelors always did the best and they are exactly as I remember them to be. Will always add at least one to every order!

Mushy peas is one of the only British delicacies I don't really get. Peas are delicious in every form - frozen, canned, even pea soup.. but mushy peas don't really do it for me. I can say Batchelors always provide a good quality product, hence the 3 stars but I won't buy it again in a hurry.

We just love these mushy peas. They are always tasty and taste as good as the ones we remember getting from the fish shop. One can is more than enough for two people and they are easy to keep in storage for when you just want that from home taste.

These mushy peas are the best on the market in my opinion. Have a great colour, texture and taste.

I never liked the chip shop style although I don't hold a grudge against those that love them.

It has been a while since eating these the last time and OMG. Now I realise what I was missing.

These will be in my trolley on the next order for sure!

Giving these five although I haven't tasted them - I usually order the chip shop ones. I don't know what the difference is, maybe someone could explain. The price is the same too.

I'm giving them five because I love mushy peas, cold or hot. Try them with a few drops of vinegar and imagine you're in the chippie.

Would you like to write a review for Batchelors Mushy Peas?